You are here: Home / Archives for research

Now researchers have found that in late-onset Alzheimer’s disease, beta-amyloid is produced in the brain at a normal rate but is not cleared, or removed from the brain, efficiently. END_OF_DOCUMENT_TOKEN_TO_BE_REPLACED

Scientists have discovered mutations in a particular gene that affects the treatment prognosis for some patients with acute myeloid leukemia (AML), an aggressive blood cancer that kills 9,000 Americans annually.

The Washington University School of Medicine in St. Louis team initially discovered a mutation by completely sequencing the genome of a single AML patient. They then used targeted DNA sequencing on nearly 300 additional AML patient samples to confirm that mutations discovered in one gene correlated with the disease. Although genetic changes previously were found in AML, this work shows that newly discovered mutations in a single gene, called DNA methyltransferase 3A or DNMT3A, appear responsible for treatment failure in a significant number of AML patients. The finding should prove rapidly useful in treating patients and may provide a molecular target against which to develop new drugs. END_OF_DOCUMENT_TOKEN_TO_BE_REPLACED

A team led by researchers at the National Human Genome Research Institute (NHGRI),  has captured the most comprehensive snapshot to date of DNA regions that regulate genes in human pancreatic islet cells, a subset of which produces insulin.

The study highlights the importance of genome regulatory sequences in human health and disease, particularly type 2 diabetes, which affects more than 20 million people in the United States and 200 million people worldwide.

“This study applies the power of epigenomics to a common disease with both inherited and environmental causes,”said NHGRI Scientific Director Daniel Kastner, M.D., Ph.D. “Epigenomic studies are exciting new avenues for genomic analysis, providing the opportunity to peer deeper into genome function, and giving rise to new insights about our genome’s adaptability and potential.” END_OF_DOCUMENT_TOKEN_TO_BE_REPLACED

Four new contracts for large-scale clinical trials that address the problem of antimicrobial resistance have been funded by the National Institutes of Health. Over the next five to six years, these new clinical trials will evaluate treatment alternatives for diseases for which antibiotics are prescribed most often, including acute otitis media (middle ear infections), community-acquired pneumonia and diseases caused by Gram-negative bacteria, which frequently are resistant to first-line antibiotics. Each trial will enroll at least 1,000 participants who have been diagnosed with these illnesses and diseases. END_OF_DOCUMENT_TOKEN_TO_BE_REPLACED 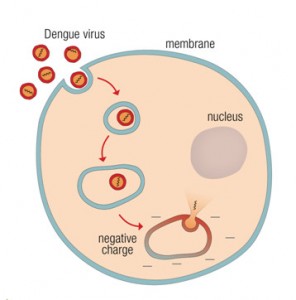 How does the dengue virus infect cells? To infect a cell, the dengue virus (counterclockwise, from upper left), binds to the cell membrane. The virus is then enveloped in the membrane, which coalesces around the virus, forming a pouch-like structure called an endosome. Deep inside the cell, the endosome membrane acquires a negative charge, which allows the virus to fuse with the endosomal membrane and release genetic material into the cell’s interior.

Researchers have discovered a key step in how the dengue virus infects a cell. The discovery one day may lead to new drugs to prevent or treat the infection.

Researchers from the National Institutes of Health discovered how the dengue virus releases itself from the protective membrane that shields it as it penetrates deep inside the cell. The discovery allows researchers to study the invasion process in the laboratory and provides a means to test potential treatments for the virus.

Dengue, which is transmitted by mosquitoes, infects up to 100 million people each year. People bitten by an infected mosquito first develop a fever, followed by other symptoms such as joint pain, rash and nausea. Without treatment, symptoms may become more severe. Patients with the severe form of the disease, dengue hemorrhagic fever, may develop difficulty breathing, bruising, bleeding from the nose or gums, and breakdown of the circulatory system. Each year, 22,000 people — most of them children — die from dengue, according to the World Health Organization.

To infect a cell, the virus binds to the cell membrane. The cell membrane engulfs the virus, enveloping it in a pouch-like structure known as an endosome. To begin the infection process, the virus delivers its hereditary material into the cytosol, the fluid interior of the cell, where it begins reproducing itself. To do so, however, it must first release itself from the endosome. The virus does this by fusing its membrane with the endosomal membrane. When the two membranes come together, they form a pore through which the virus’ genetic material is released.
Graphic shows how the virus is taken into the cell and releases its DNA in the presence of a negative charge.

To infect a cell, the dengue virus (counterclockwise, from upper left), binds to the cell membrane. The virus is then enveloped in the membrane, which coalesces around the virus, forming a pouch-like structure called an endosome. Deep inside the cell, the endosome membrane acquires a negative charge, which allows the virus to fuse with the endosomal membrane and release genetic material into the cell’s interior.

Scientists have used their understanding of HIV to develop drugs that block the fusion process and infection. To study the fusion stage of viral entry, researchers have typically observed viral fusion at the cell surface and fusion of a virus with an artificial membrane. Researchers working with dengue, however, were unable to get the virus to fuse under either of these conditions. Why dengue, unlike other viruses, would not readily fuse with these membranes had puzzled researchers for years.

The current study was undertaken by Leonid V. Chernomordik, Ph.D., of the Section on Membrane Biology at the NIH’s Eunice Kennedy Shriver National Institute of Child Health and Human Development and his colleagues, Elena Zaitseva, Sung-Tae Yang, Kamran Melikov, and Sergei Pourmal.

“We spent several years trying to understand how the dengue virus fuses with its target membrane,” said Dr. Chernomordik. “The findings will now enable us to test new ways to disrupt the fusion process and prevent infection.”

Their research was published online in PLoS Pathogens.

To conduct their study, the researchers tagged dengue virus and cell membranes with molecules that would glow when the virus and membranes fused. They also exposed samples of the virus to an artificial membrane under various conditions, to identify factors that would allow fusion to take place.

The researchers first confirmed that a protein controlling fusion is active only under acidic conditions. However, conditions in the endosome are always acidic, and this alone was not enough to guarantee fusion, they found.

In additional experiments using artificial and cell membranes along with fluorescent markers, they discovered that fusion occurred only when the membranes were negatively charged. When the endosome begins its journey, the endosomal membrane has a neutral charge. The negative charge is present only after the endosome has been taken deep within the cell.

“The confluence of acidity and a negative charge deep in the cell’s interior ensures that the virus is safe within the endosome early in its journey, when it is most vulnerable, but can release its genome when it reaches its destination,” Dr. Chernomordik said.

Dr. Chernomordik and his colleagues plan to test various compounds to learn whether they can prevent the virus from fusing with cell and artificial membranes, in order to identify potential new treatments for dengue infection.